On a recent Lync 2013 deployment to migrate from Lync 2010, I ran into an issue with the Lync 2013 Management Store Replication not working on the Edge servers that were installed on Windows 2012 OS (all the servers in the Lync 2013 deployment were on 2012). I notice the red X's on replication on the Lync Control Panel and I ran the PowerShell cmdlet Get-CsManagementStoreReplicationStatus showing UpToDate as False, LastStatusReport blank and ProductVersion blank for both Lync 2013 Edge servers.

The event logs on the Lync 2010 Front Ends, Lync 2013 Front Ends and Lync 2013 Edge servers didn't show any errors or warnings stating that replication was failing. I checked all the usual suspects:


...and finally performed an comprehensive web search about this issue with no luck.

I spent enough time on this issue and decided to enroll the help of a very knowledgeable coworker named James Denavit (who happens to be a Lync 2010 MCM) before I throw in the towel and call Microsoft Support.

Luckily for me, James had the great idea of running the Lync Logging Tool from one of the Lync 2010 Front End servers. We ran it on the 2010 Front End because I did not move the CMS to the Lync 2013 yet. So we ran logging with the following options: 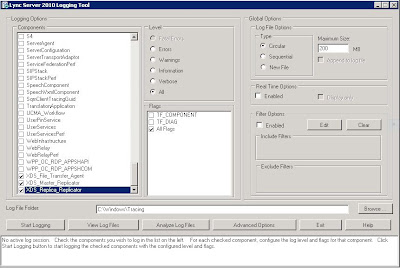 After running the Invoke-CsManagementStoreReplication PowerShell cmdlet from the Lync 2010 Front End server a couple times. I stopped the Logging tool and analyzed them. What we found were the following warnings: 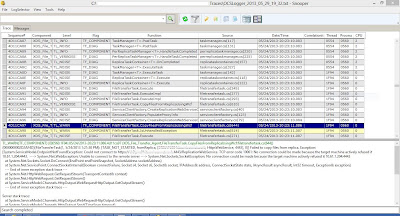 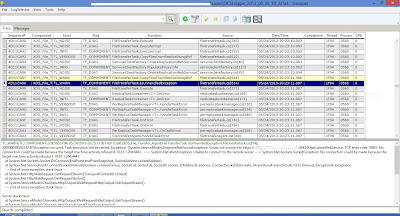 One of the red flags we saw was:

James did a search based on this and found the following post from The Lync Guy Blog:
http://ocsguy.com/2011/09/07/troubleshooting-cms-replication/

I did find this blog post during my web search but lucky for me, James read the responses (which obviously I didn't) and pointed out the response from Jonatan talking about adding the registry entry: DWord value SendTrustedIssuerList to the HKey_Local_Machine\SYSTEM\CurrentControlSet\Control\SecurityProviders\SCHANNEL key and assigning it a value of 0.

After modifying the registry, I rebooted the Edge server and ran the Invoke-CsManagementStoreReplication PowerShell cmdlet from the Lync 2010 Front End server a couple times again and still no luck. I then proceeded to read more of the responses and the last response from Chris Duva stated that he added another registry entry.

I added the registry entry DWord value ClientAuthTrustMode to the HKey_Local_Machine\SYSTEM\CurrentControlSet\Control\SecurityProviders\SCHANNEL key and assigning it a value of 2. I rebooted the Edge server again and ran the Invoke cmdlet again and voila!!! It worked.

Thanks to James for helping me with this issue as well as answering questions whenever I have them.